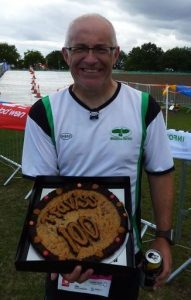 2009 – My girlfriend wanted someone to train with for the London Marathon… in the end she didn’t get in anyway, but as we’d started training anyway, we carried on!

Mississippi Blues Marathon in Jackson. Just a very friendly event in a small American city you’d never otherwise visit aside from there being a marathon on!

Getting off a plane from Dallas after having done nine marathons in nine days and driving straight to the tenth in ten days. Very tempted to just go home as had zero sleep on the flight… was worth it as that set the mark for marathons in 365 days at 115.

Moors the Merrier in 2011 – Torrential rain, mist and murk on the Yorkshire Moors trying to find paths and landmarks in a seemingly never ending identical landscape of streams, mud and rain. Was just miserable, cold, wet, chafed and blistered to bits…

Anything is better than nothing.

I’ve had all sorts. If you can imagine it, I’ve probably had it at some stage!

Virtually all my training is in races… I barely train.

Q14. Do you have a Favourite quote [running or otherwise?]

Dripping sandwiches. One mouthful before I worked out what they were!

Q16. Strangest thing you’ve ever seen during a marathon?

Stepping out from a trail into a seaside town where the marshalls were dressed as pirates, we’d been out in the moors and looked a muddy mess and there were these pirates and lots of tourists and they all just kind of looked at us like we were insane!

Q20. What event have you not yet completed that you would like to do the most in the future?

Something nasty, probably Badwater 135. Did the marathon there in 2011 but the ultra would be something else