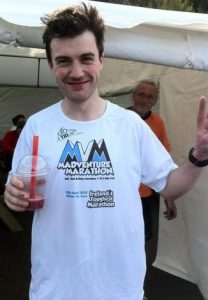 I started running last October; I wanted to raise money for a charity called the Inspire Ireland Foundation that does important work in the area of youth mental health through their flagship program, Reach Out. I operate a fundraising blog called ‘Running for Reachout’, which can be found at http://www.facebook.com/runningforreachout

My favourite event was the very first one – the West of Ireland marathon in Connemara last March. It was a completely new experience and tougher than anything I’d ever done before.

Best running performance was probably the last bank holiday weekend – ran three marathons in three days – Ballyhoura, Limerick and Belfast – and got a PB in Limerick.

Asics all the way!

Worst marathon experience was the West of Ireland marathon in Portumna directly after the Clare Madventure. Hurt myself after six miles and ended up walking the rest of the course, which took over six hours. Not fun!

Ran the GOAL Christmas mile last year in 6 minutes on the nose, that’s the best I’ve done so far.

I did injure my knee once while training and was out for three weeks, but otherwise nothing too serious. I’m usually in bits for a while after a marathon but it normally wears off after a day or two.

Dislike hills as I got that first knee injury doing hill sprints in Drogheda and have disliked it ever since. I enjoy pyramid training sessions quite a lot though.

They’ve all been 26.2 mile marathons so far.

Q14. Do you have a Favourite quote [running or otherwise?]

Things should not just be done well, but with style too.

Mars bars, snickers and twixes; they were handing them out at the Ballyhoura Mountain Marathon. Whatever works, I suppose!

Q16. Strangest thing you’ve ever seen during a marathon?

In Connemara, I saw a guy dressed in a leprechaun costume freewheeling into Leenane on a large rickshaw; can’t remember who he was doing it for through.

Usually I just can’t get wait to lie down and get some food and a lucozade.

It depends. Not if there’s only a week in between marathons. But I wouldn’t like to go any longer than that without training.

It’s not something I’ve given too much thought to, hopefully it won’t be an issue for some time to come.

Q20. What event have you not yet completed that you would like to do the most in the future?

The 4 Deserts, although it’s a bit of a pipe dream at this stage.