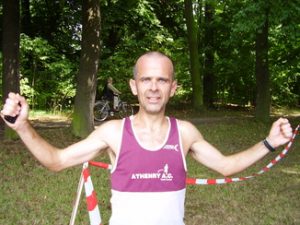 I had tried and failed to train for a marathon as a teenager, but then got going again around Christmas 1998. A combination of boredom, curiosity and not wanting to be too old to run, got me off the couch and into the Phoenix Park in Dublin.

Portumna 50km 2011 – Went from running, to sleeping on the grass, to the back of an ambulance. There are still large parts of that day I don’t remember. It’s still a great race; I just wasn’t able for it that day. I’ll be back 😉

Have done 5:11 years ago, would like to think I’d get that a little lower with practice.

Have had at least two stress fractures, but nothing that kept me off the road for more than 8 10 weeks.

Q12. What training session do you find the hardest/dislike the most and what’s your favorite session?

Q14.  Do you have a Favorite quote running or otherwise?

Yes, but not for long.