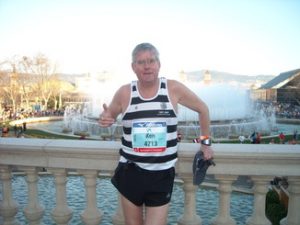 I would have to say the London Marathon. It’s a great w/end. The expo, the sights along the course and the spectator support is fantastic.

In the last four years I have been averaging about 1500 miles a year. Therefore roughly 30 miles a week.

Speed wise it would have to be the 2008 Marine Corps Marathon in Washington DC when I achieved my Boston Qualifier Time of 3hrs 34mins 41secs. Unfortunately I didn’t get to Boston the next year. Singapore Airlines decided to have a flight sale and I went to Western Australia with my wife, Ann, instead. No racing but a cracker holiday.

I wear Asics 2160’s and have been wearing this shoe for almost 10yrs thro its many upgrades. Don’t wear flats but have cross country spikes and trail running shoes.

I can’t really recall a worst experience. I feel you learn something from each setback and there have been a couple. A really painful experience was going over on my ankle whilst running the Longford Marathon a few years back. After a couple of mins I tried to run on it but had to turn back at the Half Marathon Cut Off point. Amazing the colours you get in a badly bruised ankle.
Lesson learnt. Last October whilst running in the Causeway Coast Marathon I put my foot in a divot like hole on the course. Rather than put the weight on to my foot and risk the same injury I simply rolled forward and skated on my head along the grass to a gorse bush. Priorities as I was running two marathons the following two weekends in Canada and there was no way I wanted any injury.

Not sure but maybe 7mins 30secs

Hard to say but what I’ve found to be great advice is to train with a running club and do the Hill and Speed sessions. Prior to joining a club I seemed to run at the one pace all the time thinking that sticking to marathon pace would assist my marathon running. Wrong. It led to nothing but one injury after another as I wasn’t stretching and improving my other leg muscles.

I suffered from really painful knees (inner ligament) and had to see podiatrists. My hamstrings were too tight and causing imbalance in the knees. Stretching the hamstrings sorted this out. The main exercise was to stand at the bottom of the stairs upright and put my leg out and rest the heel on the third step (a telephone directory placed under the heel can also help with the stretch) and count to 30. Then change legs and repeat three times.

As long as it’s a Club Training night and I’m running in a group with my peers I don’t mind Hill or Speed sessions. Training alone is a different matter as I just cannot get into a fartleg frame of mind. Out alone I don’t mind hitting each hill hard and doing a recovery jog afterwards.

Last year I ran the Glasgow to Edinburgh Double Marathon alongside the Clyde and Union Canals and it was measured as 56.2 miles. It took me 10hrs 1Omins 12secs and the finish was outside a pub at Edinburgh Quays. What can I say?

Q14.  Do you have a Favourite quote [running or otherwise?]

I gulped down a coffee flavoured energy gel unexpectantly during a Scottish Marathon which came as a complete and not particularly pleasant experience as the taste buds kicked in. In the water stations at the Marathon du Cognac in France we were being offered a choice from the local fortified wine, cognac or water. At the 20 mile mark I decided that I wasn’t going to be the winner that day and it was time to check out their hospitality.

The Beijing Marathon in 2009 was a bit of a culture shock. The race started outside the Forbidden City in Tian’anmen Square with Mao Zedong looking down on us runners. After only about 100yds runners were breaking off to go to the toilet against the red walls of the City. I had mental pictures of Ozzie Osbourne and the Alamo? The route itself was lined by young soldiers in full dress uniform with white gloves, tunics, caps etc standing to attention and facing away from the runners looking at empty streets etc. When we finished the race in the National Stadium we were met by officials with loudhailers telling (sorry ordering) us to move on and not to stop in the Stadium. We had to form a queue to exit the Stadium and no slackers allowed.

Nope but I could always take up Triathlons.
Only joking, but the cycling and swimming would have to be in serious contention.

Cutting back a little bit in the marathon running after completing 23 marathons/ultras last year. To run a fast London Marathon this year is obviously a challenge. Or to run 2012 miles in the year to meet the challenge that a very good friend in the Marathon Club of Ireland has set us.